Excerpt from Chapter 1 of the Novel America 2034:
How Trump Steals 2020 Election 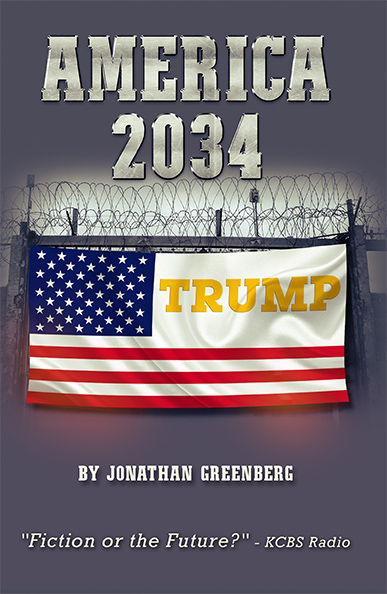 The events leading up to the most controversial election in history began early Monday morning, November 2, 2020, the day before most Americans headed to the polls. At dawn, bombs exploded at polling locations in 7 states. Nobody was hurt—and many, like Winston Smith, suspected that Trump’s agents had planted the bombs. But the morning news reports quoted White House officials calling the incidents a “9-11 style attack on American democracy.”

A few hours after the bombings, Trump appeared in a live state of emergency newscast that overrode programming on every network. Trump addressed the nation from the secure Situation Room under the White House. The news showed the President sitting at the head of a table filled with generals in uniforms glistening with medals. Behind Trump’s head was a slide show of buildings demolished by the bombs. Trump spoke with a somber, vengeful tone:

“My fellow Americans: our country is under attack! This morning, radical terrorists ignited bombs in 7 polling places across our great nation. The F.B.I. has informed me that the far left Antifa organization sent an email taking credit for the crimes, with a warning that far worse attacks will greet Americans voting in Republican leaning districts on Election Day. The violent army of the far left are attempting to scare off voters who want to reelect me to keep making America great. Instead they want to get millions of illegal immigrants and felons to fraudulently vote to elect radical Democrats, who will then round up your guns and install a Communist dictatorship. I join every red-blooded American when I say: Over my dead body! We will not surrender our sacred democracy to terrorists! Ne-vah!”

“I am hereby declaring a national state of emergency, blacking out all non-government communications and ordering the Attorney General to mobilize all national security agencies to take federal control of registration and vote counting at every polling place in the nation. But we will not wait around like sitting ducks for the next attack. As I speak, thousands of Antifa terrorists and their enablers are being rounded up and arrested.”

“As part of this national emergency decree, I have signed an executive order nullifying all mail-in ballots. Every bonafide American voter will be required to appear in person on Election Day. Citizens must bring their official ID to their regular polling place. I assure you, as long as I am president, it will be safe to vote in the United States of America. God bless you, and God bless the greatest country on earth.”

…At first, Winston and his staffers were sure that the media shutdown would be lifted for Election Day. But they were wrong. The only broadcasts permitted that day were from the government-controlled emergency channels, repeating President Trump’s speech while informing voters nationwide that the polls were open and safe.

Finally, in the late afternoon, Winston headed out to vote. Like more than 150 million other Americans, he refused to allow the explosions to stop him from voting in the most important election of a lifetime.

…Security was heavier than he had ever seen it. Local voting officials checked his identification against a voting roster, but before handing him a verified Voter ID card, he was hustled to a second line, where his ID was checked by a federal agent against a database of names of millions of suspected illegal immigrants, as well as millions of others with pending immigration cases.

He noticed a Latina woman near him arguing with a registration agent. “What do you mean I cannot vote today!” she yelled. “I have voted here for 20 years. My grandparents voted in Colorado before you were born!”

The federal official held firm. “Rosa Sanchez,” he read from a laptop in front of him. “Says here you entered the country two years ago and don’t even have a green card. You know it’s a felony to vote illegally punishable…”

“You’re not serious, are you,” she shouted. “Do you know how many Rosa Sanchez’s there are in Colorado? Are you telling me that you are removing the right to vote from every American with a Spanish name? Is that what you’re doing?”

Winston voted with a distressing awareness that what he had witnessed was being repeated in tens of thousands of polling places across the country.

Shortly before midnight on November 3, when Trump’s state of emergency communications blackout was lifted, national news networks reported that President Trump had won reelection in a stunning upset. Trump held every state he had taken in 2016 as well as six more states. Republicans had also won every contested Senate race in the country and enough seats to take control of the House of Representatives, defying all polls and historic voting patterns.

The election coverage concluded with President Trump’s gleeful victory speech. He said: “My fellow Americans: we are victorious, with the largest landslide in history. Today we stopped more than five million illegal immigrants as they tried, as they have done before, to vote and steal this election for the Democrats.

“But tonight, we have reason to celebrate, to look forward, not backward, to an even greater future. To those who want to fight about the past, to those who want to resist and violently protest law and order, I have this message: We have zero tolerance for the subversion of our democracy. A new day has arrived, in which God’s bounty—and his justice—rains upon our great nation and on every red blooded true American, like never before. Good night, and God Bless America!”

The next day, millions of Americans began mobilizing for a historic march on Washington and a nationwide strike to shut down the government at the end of the week unless a new election with paper ballots counted by the states and monitored by the United Nations was held.

That Friday morning, Trump issued his second state of emergency. Appearing in another emergency broadcast, he said, “To protect public safety from the communist mobs planning riots across our great nation today, I hereby declare martial law nationwide. Today it is illegal to open businesses or gather in public places. This is an advisory, and a warning. Stay indoors today and obey the law if you value your life. Our army, national guard and police will take whatever steps necessary–whatever steps–to maintain order!

Americans defied Trump by turning out en masse to protest. More than 2 million people converged on Washington from all directions for the largest protest ever.

Protesters in the capital and in cities across the country were met by platoons of heavily armed soldiers and riot police. After they refused orders to turn back, soldiers opened fire on the crowds, killing dozens and injuring hundreds while sending a message that tyranny was now the law of the land.

Protesters fled in all directions. They were corralled and arrested by teams of waiting police and national guardsmen who handcuffed and arrested them. They were then loaded onto waiting buses, which ferried them to massive makeshift federal internment camps that had been set up in fairgrounds and fields surrounding every major city.

That day, nearly 10 million Americans were detained as felons under Trump’s martial law decree. Those able to pay a $20,000 fine to a new private prison company secretly owned by Trump were released, with a felony conviction record that banned them from ever voting again.</p>  <p>Half of them were unable to pay the fine. They were designated “debtor felons,” to spend the rest of their lives in what was to become the world’s largest network of slave labor camps.